Oh man what a week this has been so far. We’ve see some cool and stylish products, and we have even selected our “Best of Show”. So with that being said, I started to think, who would be worst of show. Let me say as a long time AT&T user with usually no problems with the carrier, AT&T sucked!

Last year the service was bad and I had to leave my Blackberry on EDGE to function. This year was a complete fail. You know we had the whole plan to tweet, foursquare, and upload pictures to Flickr throughout the whole show. Now we was able to do this, but what a pain it has been. 3G failed, EDGE failed.

To put this in perspective, I had to use the hotspot of Jason Million (another team member) off his G2 for T-Mobile to get reliable service. On not only was it reliable, but there was some speed with it. Using AT&T checking in either didn’t happy or took forever. Tweeting took multiple tries, and forget about uploading to Flickr while on the move.

AT&T you guys sucked at this CES, so much that for the first time in the 4-5 years I have been with you, I thought about switching. Your only saving grace is that I don’t travel much, and I have no issues when in New York City. But AT&T, congratulations on winning Worst of Show! 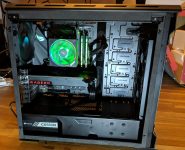