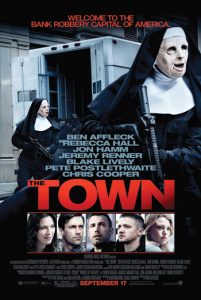 In the new movie â€œThe Townâ€, Doug MacRay (Ben Affleck) is the leader of a gang of bank robbers who live in the town of Charlestown in Boston. They rob bank trucks and banks and then return back to their small town of Charlestown within minutes. Their robberies are always well planned out and they have been very successful in their robberies for quite some time. On one of their robberies they end up taking the bank manager, Claire Keesey (Rebecca Hall) hostage. They take her identification card and release her unharmed. When one of Dougâ€™s crew members, James (Jeremy Renner) feels that Claire should be checked out to make sure she hasnâ€™t talked to any police, Doug tells him he will check on her. Claire, not knowing what any of the bank robbers looks like, meets Doug while doing her laundry. There is an instant attraction between the two of them and they start to go out on dates. Claire tells Doug about the robbery and that an FBI agent, Adam Frawley (Jon Hamm) came around to question her about it. This gets Doug nervous, because he has now fallen for Claire and he doesnâ€™t want her to realize that just days earlier, it was him and his crew that put her through the traumatic incident. When they plan to rob another bank, Doug realizes that he has to somehow keep his secret from Claire, for her own safety. Not having any immediate family in his life, Doug has never had to worry about anyone getting hurt, because of his bank heists. Now that he is with Claire, this situation between them can become very dangerous for the both of them. With the FBI now on the case, will Doug be able to pull off yet another successful robbery, while still keeping his secret from Claire? Will the FBI agent be able to catch the crew in the act of robbing their next bank?

I thought this movie was well written and it was very entertaining. Ben Affleck was really good in this movie that he also re-wrote and directed. Itâ€™s been a while since Affleck has had the leading role in a movie, and he did a great job in this one. He was able to pull off being a charming guy when he was with Rebecca Hallâ€™s character in one scene, and then become a ruthless, take no mess, bank robber in the next scÃ¨ne. I guess it wasnâ€™t difficult, being that he was directing the film. The movieâ€™s storyline somewhat reminded me of â€œSet It Offâ€, where one of the female bank robbers started seeing the bank manager of a bank they had robbed and that character also didnâ€™t want their identity to be known. That was the only similarity to that movie though. The action in this movie was really good, and the movie moved at a fast pace over the two hours of film. Jeremy Renner was very convincing as the ruthless member in the crew, who had a short fuse. What I also found interesting is that this story was based on an actual town that does have the highest amount of bank robberies in the world. 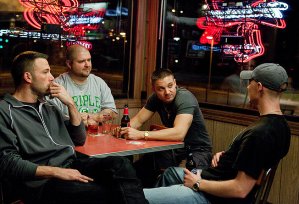 When writing this review I searched the town of Charlestown in Boston and that was not accurate, but there is a town called Charleston, in South Carolina, that as of June 29th, there have been 23 bank robberies in that area in just this year. So it kind of made the story even more interesting. This movie was really enjoyable and I gave it 2 Â½ banks out of 4. It didnâ€™t try to make the robberies all technical and complicating, just run in, get the money, and run out. The movie runs 2 hrs. It was rated R for strong violence, pervasive language, some sexuality and drug use. It was written by Peter Craig (II), Ben Affleck, and Aaron Stockard, from source material from the book â€œPrince of Thievesâ€ by Chuck Hogan. It was directed by Ben Affleck. The film was produced by GK Films, Legendary Pictures, Inc., Thunder Road Pictures. It was distributed by Warner Bros. Pictures Distribution.

If youâ€™re ever in a bank in Charleston, leave quickly, it may get robbed. Ezo
Next Review: Devil