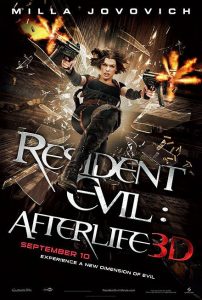 So the 4th installment in the â€œResident Evilâ€ franchise came out this past weekend. In this one, Alice (Milla Jovovich) is coming after the Umbrellaâ€™s underground bunker to put an end to their bio-chemical testing, and possibly find any survivors on her way. Sheâ€™ll have a lot of help with her, coming by way of an army of clones that were made of her in the last installment. After Alice and her clones battle the Umbrellaâ€™s fortress, she goes to Alaska to seek out any survivors who were searching for a place called Arcadia where survivors were promised a safe haven away from the un-dead. There she finds Claire (Ali Larter) the only remaining survivor of the people she sent to Alaska in search for the promised sanctuary in the last movie.

Alice and Claire head off to Los Angeles to search for anymore people who might be still alive. When they pass over a prison, they see that there are some survivors who have taken shelter in the prison. Once Alice talks to two of the survivors, Bennett (Kim Coates) and Luther (Boris Kodjoe), they tell her that Arcadia is not an island, but is actually a ship that is sitting near the shore off the coast of LA. Now Alice must find a way to get all of them from the prison to the ship, and there are thousands of the un-dead in their path. Also at the prison she meets Chris Redfield (Wentworth Miller), who turns out to be the brother of Claire. He tells her that he knows a way to get through the army of undead that stand between them and Arcadia. Meanwhile Albert Wesker (Shawn Roberts), the leader of the Umbrella Corporation, escaped the underground fortress and is still out to get Aliceâ€™s DNA, so that he can control the T-Virus that has caused this whole apocalyptic disaster. Alice must find a way to get Claire and the others to safety, while still trying to put an end to Weskerâ€™s bio-chemical testing. Can she once again defeat all of the atrocities that are the results of the Umbrellaâ€™s operations and get the survivors to safety or will this be the last battle for Alice? 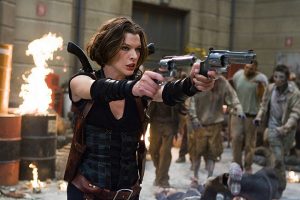 Well I have to say that I have enjoyed the â€œResident Evilâ€ movies over the years. They have been filled with action and horror and some great special effects. Even though they have long gone away from the storyline of the video game, they have still been entertaining. With this one being the 4th installment though, I feel it has run its course and should come to an end. The producers of the franchise I guess have other plans as this will not be the last we see of Alice and the Umbrella Corporation. This movie leaves you with yet another cliff hanger ending that will surely need to have another movie come after it.

I also found that itâ€™s becoming quite repetitive. Each movie now is basically like the last. Alice finds the Umbrella Corporation, Alice destroys their base, Alice finds survivors who mostly donâ€™t make it to the next movie. The action scenes are always good, but donâ€™t we also deserve a good storyline? Then to my surprise one of the survivors held up in the prison, who happens to be the only one who knows how to escape undetected from the un-dead waiting outside the walls, is prison escape expert, Wentworth Miller from the now finished TV show â€œPrison Breakâ€. Come on Wentworth, you couldnâ€™t find a role that didnâ€™t involve you escaping from a prison? Then there was Ali Larter who plays Claire in the movie. Her character fightâ€™s just as well as Alice in the movie, which of course got me to thinking of her old role as a superhero in the cancelled TV show â€œHeroesâ€. Shawn Roberts who plays the leader of Umbrella was pretty good as the main nemesis in the movie. The fight scenes against him were kind of short, but he looked menacing in his dark suit and dark sunglasses, not to mention the evil that was inside of him. Boris Kodjoe was good in his role even though he had one of those, â€œcome on, he escaped thatâ€ moments. The slow motion fight scenes done in 3D were superb. They actually used the 3 dimensional effects to have objects come at you as appose to some movies that use the technology to just have you feel like youâ€™re in the scene. So overall, Iâ€™d have to say that the action and the effects were the main draw to this movie, as the story just seemed recycled. I gave this movie 1 Â½ stars out of 4. Itâ€™s starting to lose its appeal. The movie is 1 hour and 36 mins. Itâ€™s rated R for sequences of strong violence and language. It was written and directed by Paul W.S. Anderson. It was produced by Constantin Film. It was distributed Sony Pictures.

Sometimes you have to know when to throw in the towel. Ezo
Next weekâ€™s review: The Town