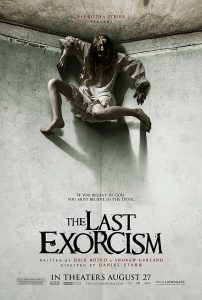 When reverend Cotton Marcus (Patrick Fabian) hires a film crew to document himself, his motive is to show the tricks of the trade of being a preacher and also to expose himself as the fraudulent preacher that he is. He tells them that he will also show that the people he has performed exorcisms on are nothing more than religious fanatics who believe that they are possessed by demons. He picks a letter that he has received from someone wanting him to perform an exorcism, and he and the film crew go out to a farm in Louisiana. Once they get there Cotton meets with Louis Sweetzer (Louis Herthum), who tells him that his daughter Nell (Ashley Bell) is possessed and has been killing his cattle in the middle of the night.

Cotton, is a charismatic preacher who although he does believe in religion, he also believes that the people who are supposedly possessed are nothing more than someone with mental problems. He feels that with his trickery and effects that he uses, he can convince anyone that he has extracted the demons that have possessed them. After doing his exorcism on Nell, he tells her father that his daughter will be fine and that the demon has been removed. Cotton soon discovers that there truly is something wrong with Nell, but heâ€™s still not convinced that she is possessed. He performs another exorcism on her and his religious beliefs are put to the test when Nell actually does show signs of having some kind of evil inside of her. Now Cotton and his film crew must find a way to help Nell before itâ€™s too late, as she is becoming more and more dangerous to herself and everyone else involved. 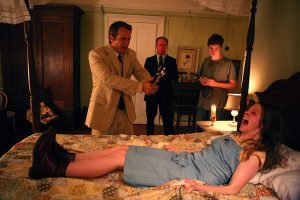 I have to admit that I was possessed by this movie trailer. I thought that the movie was going to be really scary and shocking, because the trailer had looked so good. After coming out of the theater, I had been thoroughly exorcised. This movie was straight fraudulent. It bordered on more comedy than any real scare factors. I thought that this was going to be a good horror movie and all it turned out to be was a bad way to spend my money. There was no wall climbing scene, like shown on the poster. The one scene were the girlâ€™s body was contorting was pretty cool, but Iâ€™ve seen yoga people do the same exact move, and better I might add. Then when you think that youâ€™re finally going to see some real signs of demonic possession, the girl easily snaps out of it. The final slap in the face came towards the end of the movie when things just got really stupid and confusing. It turns out that the girl was possessed, and it was somehow connected to the townâ€™s own preacher. He then performed a sort of exorcism/extraction and it just really left you wondering as to what the hell, excuse the pun, just happened.

If I took anything away from this movie, it would be the confessions that the preacher, Cotton revealed about the practice of performing religion in churches. We all know that all preachers arenâ€™t in it for the good of their followers and this movie made fun of that fact. Other than that it was a waste of my time and money and truly questioned my judgment of movie trailers once again. I will give this movie Â½ a demon out of 4. It just didnâ€™t live up to the hype. The movie runs 1 hour and 30mins. It was rated PG-13 for disturbing violent content and terror, some sexual references and thematic material. It was written by Huck Botko and Andrew Gurland. It was directed by Daniel Stamm. The movie was produced by Strike Entertainment. It was distributed by Lionsgate.

Make sure your pastor isnâ€™t a con man when donating to the collection plate. Ezo
Next Weekâ€™s review: Machete