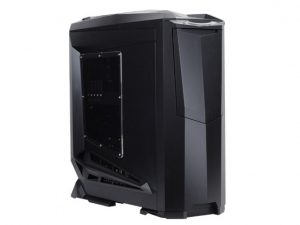 How are you guys doing today? Today I’d like to introduce the Raven 1 by Silverstone! Just what exactly makes this case so unique? Well for starters, it takes the conventional motherboard and rotates it 90 degrees. Now backtracking to middle school science class, we’ve all learned that hot air naturally rises. So now instead of a front intake to back exhaust fan setup, with the simple idea of hot air rising, Silverstone went ahead and changed it to bottom intake and top exhaust. Another reason this design is eye catching is because it separates GPU(video card) and CPU heat from each other. In a normal case (pun unintended) the GPU’s hot air will rise and then meet with more hot air in the CPU area until it is exhausted out. This design flips it so the GPU and CPU’s hot air, which is already going up, will go up!

Here is a better explanation from Silverstone themselves!

Now this case will run you roughly $200. (Really depends on where you get it) But hey, your computer might just thank you.