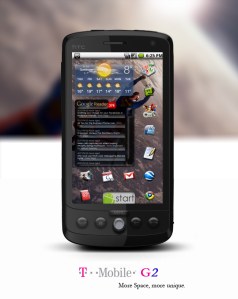 When the G1 first came it, it was probably THE phone. I mean it had a physical keyboard, it slid out, it was just quite frankly amazing. Good news for you G1 users who have been tardy to switch to a new phone because the TMobile is about to release the G2! Yes you read right, the G2 or otherwise known as the HTC vision. So what’s new?

Hardware additions:
1) Subtle front camera on the edge of the speaker. (like the X1’s cam, for waving hand gesture control software, and video chats)
2) 3.5 headphone jack e.g. http://img353.imageshack.us/img353/2…headsetzw0.jpg
3) TV out
4) Dedicated Lock/Unlock side switch (like the Nokia 5800 XpressMusic “Tube”)
5) Face sensor (turns off screen to save power during calls, like the Nokia “Tube”)

Does NOT have a tiling screen.

More information can be found here. As for the release date, it has been estimated to be around September 29th so get ready folks this one is going to be popular!