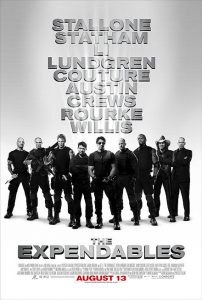 Sylvester Stallone once said that Hollywood didnâ€™t have any more parts for him to play. I think that was the best thing that could have happened to him, because he is becoming quite the action movie director. In his new movie â€œThe Expendablesâ€ which he wrote the screenplay for and directed, he stars as Barney Ross a leader of a band of mercenaries who get an assignment from a mysterious government agent named Church (Bruce Willis), to go and kill a ruthless dictator, General Gaza (David Zayas) in a South American country. When he takes his long time friend and one of his best soldiers, Lee Christmas (Jason Statham) on a reconnaissance mission to Vilene to meet with the contact, a freedom fighter named Sandra (Giselle Itie), he discovers that the mission may actually be to take out a rogue ex-CIA operative named James Monroe (Eric Roberts) who along with his henchman Paine (Stone Cold Steve Austin) are controlling the country and its army by paying off the General.

When they run into trouble, Barney and Lee have to leave the island in a hurry. They try to convince Sandra to leave with them, but she is reluctant to leave her people behind and refuses to go. Knowing that Sandraâ€™s life is definitely on the line and feeling like he failed her, Ross decides he is going to go back and finish the job. There by saving Sandra from the clutches of Monroe and general Gaza and freeing her people from their governmentâ€™s tyranny. He tells his team that they donâ€™t have to come with him on what may be a suicide mission, but his team decides to follow their leader into battle. So with his other team members, Yin Yang (Jet Li) a master at close-quarter combat, Hale Caesar (Terry Crews), a long-barrel weapons specialist, Toll Road (Randy Couture), a skilled demolitions expert, and intellect of the group, and Lee, a former SAS, and expert knife thrower, they head out to bring down the Vilene army. The only member who wonâ€™t be going is Gunner Jensen (Dolph Lundgren), a combat veteran, and an expert in precision sniping, who was recently banned from the team because he has become a risk due to his drug use. Can this team of military experts go up against a whole foreign army? What will Gunner do now that he has been bumped from the group? Does Sandra have a secret that may jeopardize the whole mission? 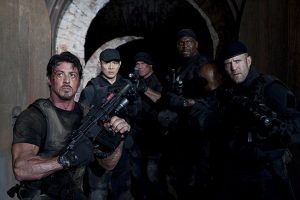 This movie was an action loverâ€™s dream come true. Sylvester Stallone was able to put together some of the best action genre actors of the last three decades into one movie. No one came in thinking they were more valuable than the next one, and they all did it for the love and respect of Stallone. He also did each one of them justice in this movie as they were all able to shine in their own moments of the film. Each actor had a pivotal scene in the movie, and Stallone also had some great fight scenes between certain characters. Arnold Schwarzenegger even came out of his governor duties in California to have a cameo in the film. In his cameo which also had Stallone and Willis in the scene, there was so much testosterone being thrown around it was hilarious. It also featured one of the biggest laughs of the movie as Arnold exited. Jason Statham basically had the co-starring role with Stallone as he was the only one who had a side story in the movie. The chemistry between the two of them was very convincing as they played old time buddies.

There were also a lot of jokes thrown around in this movie that helped make it just a fun movie to watch. It wasnâ€™t your basic shoot â€˜em up movie. All the actors involved seemed to be having a great time in this film. Mickey Rourke, who was also in the film, did a great performance as an ex-member of the â€œExpendablesâ€ who was trying to find peace and tranquility in his once hostel and murderous life. Stone Cold Steve Austin didnâ€™t have too many lines in the film, I think they let him add-lib in one scene as it seemed to be the same dialogue he would have said when he was wrestling. Eric Roberts did a good job as the rich ex-CIA agent who changed his profession to something more criminally inspired. Anyone who has a love of action movies and the actors who play in them will be drawn to this movie from the beginning to the very end. It was just an all around fun ride, and I have heard that the whole cast will return for a sequel that is in the works. I gave the movie 3 bullets out of 4 bullets. I was pleasantly surprised at how much I enjoyed it, and would definitely recommend it to anyone who loves action movies. The movie ran 1 hr and 43 mins. It was rated R for strong action and bloody violence throughout, and for some language. It was written by Sylvester Stallone and David Callaham. It was directed by Sylvester Stallone. The movie was produced by Nu Image/Millennium Films. It was distributed by Lionsgate.