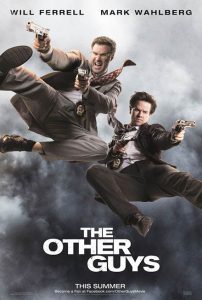 Will Ferrell never seems to disappoint. In his new movie which co-stars Mark Walberg, they play two detectives, Allen Gamble & Terry Hoitz (Ferrell & Walberg) who are assigned together as partners. Allen is content with just being an account detective, while Terry wants to get back in the field and show his talents. The reason Allen and Terry are partners is because Terry had an accident that involved Derek Jeter, and has never been able to get over it, or anyone else for that matter. Allen idolizes two other detectives, who are the cityâ€™s best cops, Highsmith (Samuel L. Jackson) and Danson (Dwayne Johnson), and this puts a strain on his relationship with his partner. Then when Highsmith and Danson are suddenly taken out of the equation, itâ€™s time for the other guys to step up to the plate. Also going after the top detectives spot are two other detectives, Martin (Rob Riggle) and Fosse (Damon Wayans, Jr) who feel they are the right choice to fill the shoes once held by Highsmith & Danson. Will Allen and Terry be able to put their differences aside to solve a major case?

Will Ferrell in my opinion is the funniest comedic actor around right now, and has been for quite some time. His movies will always have you laughing at the most crude and outrageous humor youâ€™ve ever heard. From his time on Saturday Night Live, he has given us some of the most absurdly weird, but hysterically funny characters to grace the big screen. In this movie he doesnâ€™t even make the character all that out of control like some of the others ones he has portrayed, but when put side by side with Mark Walbergâ€™s character whoâ€™s an angry partner, who doesnâ€™t much like their relationship, the combined chemistry is comedic genius. Walbergâ€™s character Terry, just wants to get back into action and make some big arrest, while Ferrellâ€™s character Allen, is busy working on an illegal permit case, which to him will be his claim to fame. When the two finally find a common ground and start to interact with each otherâ€™s private lives the movie gets even funnier. Ferrellâ€™s character has a hidden secret that he has been holding for years that he desperately wants to get out, and Walbergâ€™s character is just a little bit crazy and thinks that all crimes lead to drug busts, plus heâ€™s still dealing with the breakup of his relationship. 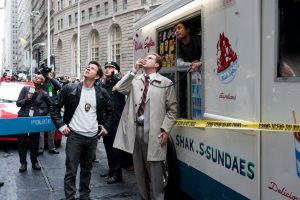 This was definitely one of the funniest buddy cop movies in years. Eva Mendez also stars in the movie playing Allenâ€™s wife, Sheila. When Terry sees her, he cannot understand why she is with Allen and he continuously flirts with her, which is hilarious. Another funny character in the movie is portrayed by Michael Keaton as the departmentâ€™s captain. He too has an ongoing joke that just gets funnier as the movie goes on. I have to say that this was the funniest movie Iâ€™ve seen from Will Ferrell since â€œStep Brothersâ€. I give the movie 3 badges out of 4. You just canâ€™t go wrong with a Will Ferrell comedy. The movie runs 1 hour and 47 mins. Itâ€™s rated PG-13 for crude and sexual content, language, violence, and some drug material. It was written by Chris Henchy and Adam Mckay. It was directed by Adam McKay. It was produced by Gary Sanchez Productions, Mosaic Media Group. It was distributed Sony Pictures Entertainment.

When youâ€™re in need of a cop, make sure you donâ€™t get the other guys. Ezo
Next weekâ€™s review: The Expendables