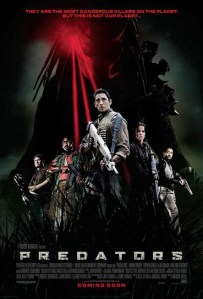 Well I went to see the new Predator movie this past weekend to see what the franchise had brought to the big screen this time around. In this one, the story is about a group of killers from all different fields. Three are mercenaries, two are assassins, one is a convict, and one is a death squad member from Africa. The only exception is a disgraced physician who is also added to the group. They are all dropped from the sky by parachute to an uncharted area none of them are familiar with. Royce (Adrian Brody), a mercenary decides he is going to find out whatâ€™s going on, and who has done this to them. They all follow his lead and soon discover that they have been brought to an alien planet.

They also discover that other creatures have been dropped on the planet as well, when they are attacked by strange alien type dogs. When the dogs are called back, Royce realizes that they have been brought to this planet as prey and that someone or something is using them as game for their hunt. Once they come face to face with the predators who are hunting them, they realize that itâ€™s not going to be easy to defeat these aliens and the types of weaponry that they have at their disposal. They must band together if they are going to have any chance at getting off of this alien world. 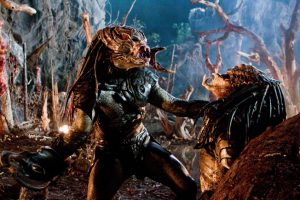 After the first â€œPredatorâ€ movie starring Arnold Schwarzenegger, there was a sequel entitled â€œPredator 2â€, which starred Danny Glover, facing one of the alien assassins in a city setting. Then there were the two â€œAlien vs. Predatorâ€ movies which combined the two alien franchises fighting one another. So now they brought out this new predator movie and titled it â€œPredatorsâ€ so that it could incorporate the alien hunters along with the people that were being hunted. Clever name, Iâ€™d have to say. They also did a revamping of the creatures by having a whole new type of predators in this one. They basically still looked like the old ones, but were bigger and these new ones also hunted the original smaller ones. Then they gave them â€œpredatorâ€ dogs, which helped in their hunt. Now did all of this add to the adventure? Not really. I mean it was a great idea, bringing human assassins to an alien planet to be hunted, but the outcomes were pretty much the same. There wasnâ€™t much new technology used by the newer predators and they should have had it where there were a group of original predators as oppose to just one that could have joined the humans in defeating the new bigger and stronger predators. Maybe they could have even thrown in some aliens just to spice it up, being that it was in a jungle setting and the aliens would not have been able to hide in dark crevices. Who knows? All I know is that it just didnâ€™t grab me this time around. I have to say that out of all the predator movies, this one would be my least favorite.

Laurence Fishburne made a cameo in this one and Iâ€™m not even sure why. He basically lasted about 5 â€“ 10 minutes, but by the trailer you would have thought he was co-starring with Adrian Brody. I did like the characters portrayed in the movie, they all kept the movie moving along. Like I said the story wasnâ€™t a bad one, itâ€™s just that it wasnâ€™t that much of a change from the original, using a jungle as the setting, aside from it being more than just one predator doing the hunting. The ending leads you to believe that there may be a sequel to this one. Maybe the predators will capture Arnold and have him join Adrian in the next go around. Anythingâ€™s possible. I give this movie 1 Â½ prey out of 4. It was entertaining, but could have been a lot better. The movie ran 1 hour and 47mins. It was rated R. It was written by Alex Litvak, Michael Finch (II), and Robert Rodriguez from source material based on â€œPredatorâ€ character from Jim & John Thomas. It was directed by Nimrod Antal. It was produced by, Troublemaker Studios, JoAnn Kane Music Service, Newman Scoring Stage, KNB EFX Group, Inc., Hybride Technologies, EFilm, and Chapman/Leonard Studio Equipment, Inc. It was distributed by 20th Century Fox.

If you ever find yourself free falling from the sky, make sure your parachute opens or you could have a rough landing. Ezo
Next weekâ€™s review: The Sorcerer’s Apprentice