So we all know that Apple is currently the reigning champion alongside with Blackberry over smart phones with maybe the HTC trailing a bit behind. However, “According to IDC’s Q1 2010 figures, Nokia is still the number one smartphone maker with a 43.9 per cent market share, but Apple is on the verge of overtaking it after its share quadrupled in the past year to hit 40.3 per cent.”

The N8 is an entertainment-oriented smartphone with a 3.5-inch touchscreen (640×360 resolution), a 12-megapixel camera, the ability to shoot 720p high definition videos and 16GB of onboard memory, which can be expanded by an extra 32GB using the memory card slot. 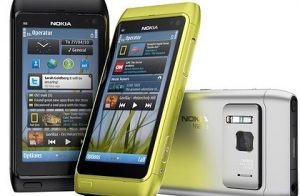 The N8 will be going for about a price of $750 and supports Adobe Flash and multitasking. It includes a HDMI output for hooking up to a flatscreen TV set and is capable of outputting Dolby Digital Plus Surround Sound. Also all Nokia phones come with free turn-by-turn GPS and Ovi Maps software which lets people broadcast their location on social networking sites. Kind of similar to the app known as “FourSquare” but with pictures. Now as we know, the iPhone supports multiple home screens letting you scroll through your apps. The N8 will only feature 3 home screens but still capable of multitasking. The N8 is is estimated release date is around early September.