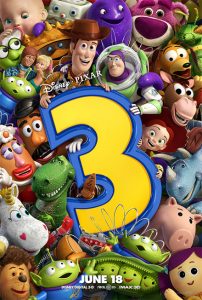 Well itâ€™s been a long run, but it seems like the toys of Toy Story have come to the end of their journey. In the new movie, our gang of toys must face the reality that their owner Andy has grown up and is now on his way to college. With no idea of their future, they become very worried that they will have no one to play with them anymore. Andyâ€™s mother wants him to decide what he is going to do with his toys. His decision is that he is going to store them in the attic for safe keeping. Then as his mother is cleaning up, she mistakes a bag that the guys are in, for the stuff that she told Andy to give to charity. The guys end up at a day care center named Sunnyside. Only Woody (Tom Hanks) gets left behind, because Andy had planned on taking his most favorite toy with him to college.

Now at the day care center and thinking that Andy didnâ€™t want them anymore, Buzz Lightyear (Tim Allen), Rex (Wallace Shawn), Hamm (John Ratzenberger), Mr. Potato Head (Don Rickles), Mrs. Potato Head (Estelle Harris), Jessie (Joan Cusack) and the rest of the gang must deal with trying to start over with new kids to play with them. The only problem is this daycare center is run by a mean spirited toy bear named â€œLotsoâ€. He puts the gang in the room with the youngest aged kids, who are not so delicate when it comes to playing with toys. Barbie (Jodi Benson) is the only one who gets to stay in the safe area, when she meets Ken (Michael Keaton) who convinces Lotso to let her stay with him. Meanwhile Woody has to find his way to Sunnyside to rescue his friends and convince them that Andy never intended on getting rid of them. Once Woody finds his friends, will they believe him? Plus how will they all escape the fortified confines of Sunnyside and its evil ruler Lotso the bear. 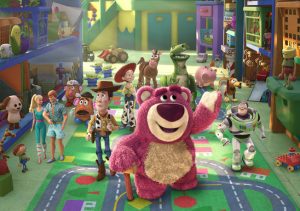 I thought this was a great ending to a perfect franchise. All of the â€œToy Storyâ€ movies have been well written and have done very well in the theaters. This installment, I would have to say was just as good as very first one. It was warm, funny, and full of adventure. The new characters were good, especially Ken. Lotso, to be a furry stuff bear was really evil in his dictatorship of Sunnyside. I liked that they told his back story as to how he got like that. Just like all of the Toy Story movies, there was a lot going on with all these toys on the scene and it kept you entertained the whole length of the film. The films ending showed that sometimes you have to move on, but that itâ€™s not always such a bad thing, especially if you can make someone else happy in the process. I gave this movie 3 Â½ toys out of 4. Itâ€™s a kidâ€™s movie for kids who love toys, and havenâ€™t we all enjoyed them as children. The movie runs 1 hour and 34mins. Itâ€™s rated G. It was written by Jared Stern and Michael Arndt. It was directed by Lee Unkrich. It was produced by Walt Disney Animation Studios, Pixar Animation Studios. It was distributed by Walt Disney Studios Distribution.

Sometimes itâ€™s hard growing up, but when you have good friends with you, it makes the journey much easier. Ezo.
Next weekâ€™s review: Grown Ups