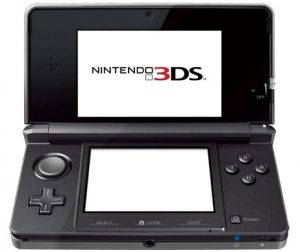 Now the Nintendo DS has been out for quite some time already and you probably have seen hundreds of them or even own one yourself. Now just exactly what is a 3DS? Well with a slight play on wording, its basically a “DS” capable of “3D” hence the clever name “3DS”. The Nintendo DS has been a cornerstone in hand held gaming but just exactly what does the 3DS bring aside from 3D?

The Nintendo 3DS has two screens just like all the DS products. The top 3D screen measures 3.53-inches with a resolution of 800×240 pixels (400×240 pixels per eye) that is able to produce a stereoscopic three-dimensional effect without 3D glasses, while the bottom screen is a 3.02-inch non-3D touch panel with a resolution of 320×240 pixels. It weighs approximately 8 oz. and, when closed, is 5.3 inches wide, 2.9 inches long, and 0.8 inches tall.

What else? The 3DS features a slider on the side that adjusts the intensity of the 3D effect, a round nub analog input called the “Slide Pad”, an accelerometer, and a gyroscope. In addition, there is an infra-red communicator port situated on the top of the unit. The 3DS also features dual cameras on the outside enabling users to take 3D photos and as well as a front facing camera which faces the user. Both cameras have a resolution of 640×480 pixels. Another thing about the 3DS is that it will have the ability to play 3D video content.

I’m not sure why the whole 3D thing started but I’m guessing ever since the movie Avatar the 3D movement just skyrocketed. I’ve never been that big of a fan of 3D but I guess we’ll see how this goes.