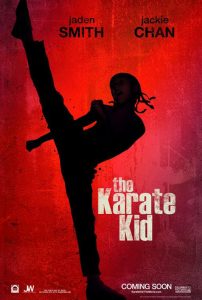 Have you ever heard the phrase, â€œbetter late, than neverâ€? Well that phrase holds well for this review. The Karate Kid remake came out this past weekend. It was produced by Will Smith and his wife Jada Pinkett Smith and has their son Jaden Smith as the star. In this telling of the story a young 12 year old boy named Dre (Jaden Smith) moves to China, when his mother Sherry Parker (Taraji P. Henson) gets a job at an automobile company. Once there, Dre must face his first day of school in a foreign country, and he doesnâ€™t know much of the Chinese language. Luckily he meets with another American boy who befriends him instantly. He also meets a Chinese girl named Mei Ying (Han Wen Wen) who he immediately falls for, and she likes him as well. Soon their cultural differences are challenged when a bully doesnâ€™t appreciate Dreâ€™s intentions with Mei Ying. He beats Dre up with the use of his kung fu skills and threatens Dre not to get close to the girl. After a couple of more devastating beat downs by the bully, Dre is at his wits end. Then one day when the bully and his friends chase Dre home and are about to give him another thrashing, a maintenance man named Mr. Han (Jackie Chan) who works at Dreâ€™s apartment building intervenes and stops all of the bullies with his masterful use of kung fu. Dre decides he wants Mr. Chu to teach him the art of kung fu.

At first he is reluctant, but when the teacher of the bullies, Master Li (Yu Rong-Guang) confronts Dre, and Han and tells them that one of them must fight, either himself or his star student, the bully. Han tells him that he will train Dre to fight his student at the upcoming Kung Fu Tournament. As Mr. Han teaches Dre the art of Kung fu, he shows him that itâ€™s not all about punching and kicking, but knowing how to be mature, respectful, and calm. Will his training be enough to beat this bully and gain some respect in his new foreign home? And will Dre learn the true lessons that Mr. Han is trying to instill in him? 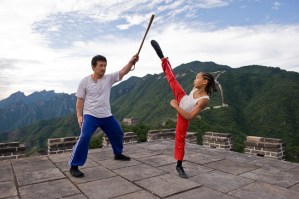 Now back in 1984 when the first â€œKarate Kidâ€ movie came out starring Ralph Macchio and Pat Morita. It was a huge success. It went on to have two sequels with the two original actors. Then it had a third sequel called â€œThe Next Karate Kidâ€ starring Pat Morita and Hilary Swank. Well now itâ€™s 2010, and they have brought the franchise back to life with this new telling of the story. Now Iâ€™m not going to say anything against the originals, they were very entertaining for the time. What I will say is this is a really great remake. I think, even better than the original. Of course the fighting scenes were way better this time around cause of the use of kung fu as oppose to just plain karate. I also loved the chemistry between Jackie Chan and Jaden Smith. I have to say that Jaden Smith is a miniature Will, whose getting an early start at, whatâ€™s sure to be a fulfilling career in films. Will and Jada are raising some really good acting children. For his first starring role, I feel that Jaden did a phenomenal job. He nailed the scene where he had to cry because of his dislike of being in China, it was very convincing. Jackie Chan was also great as the teacher this time around. He always brings warmth and realism into the roles that he plays. The kid who plays the bully also did an excellent job. He was one ruthless little boy. The change of the story being in China instead of in LA, like the original, was definitely a plus. There are a lot of scenes of Chinaâ€™s beauty and culture in the movie that gave it that extra boost in the story telling. There is a scene in the Forbidden Kingdom, that just shows the peace and tranquility that can be gained from knowing the history of Kung Fu. It was really great for them to film this on location. I give this movie 3 kicks out of 4, it was definitely one of the best remakes of an old classic in a long time. Iâ€™m sure with the success that they will have from this film, a sequel will not be far behind. The movie ran 2 hours and 6mins. It was rated PG for bullying, martial arts action violence and some mild language. It was written by Chris Murphey and Robert Mark Kamen. It was directed by Harald Zwart. It was produced by Overbrook Entertainment, Jerry Weintraub Productions, China Film Group. It was distributed by Sony Pictures Releasing.

Sometimes the best way to beat a bully is to let them beat themselves with their anger and aggression. Ezo
Next Review: TBD