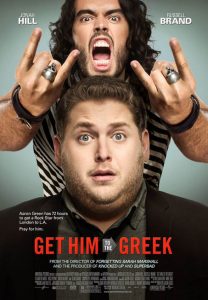 When a young record company assistant, Aaron Green (Jonah Hill) comes up with a bright idea to help the record label generate some cash flow, by having an 10th Anniversary concert of a legendary rocker named Aldous Snow (Russell Brand), his boss Sergio (Sean â€˜Diddyâ€™ Combs) thinks itâ€™s a great idea. He tells Aaron to fly to London, and get Aldous and escort the rock god to L.A.â€™s world famous Greek Theatre for the first stop on a huge comeback tour. He has 72 hours to do this, and Sergio doesnâ€™t care what he has to do to get this done. The only problem is that Aldous is a drunken, pill popping, nonstop partying, rock legend whoâ€™s very hard to handle. After his last album tanked and he went through a bad breakup with his girlfriend he has been on a downward spiral and believes he has reached the point in his career where heâ€™s just a greatest hits rocker and canâ€™t produce anymore new material. Then he finds that his ex-girlfriend Jackie Q (Rose Byrne) is in L.A. he agrees to come with Aaron to do the gig. His motive is that he will win her back while kick starting his world comeback. Itâ€™s not going to be easy for Aaron to deal with the non-stop partying that Aldous is accustomed to. Plus with Sergio setting up the Greek concert just 3 days away, how can he keep control of Aldous long enough to get him on stage in such a short time frame.

This movie had a lot of very funny scenes in it. I felt that Russell Brand was hysterical as the drugged out rocker and he plays that character so well. You may remember he did a character like this one in â€œForgetting Sarah Marshallâ€. Jonah Hill was funny as well as the assistant who adored the rock legend and wanted this to be his career changing assignment. He was more of a straight man (in comedic terms) to Brandâ€™s out of control comedic exploits. The stand out performance came from Sean â€˜Diddyâ€™ Combs. Every time he had screen time he was hilarious. He definitely stole the movie. Plus Diddy playing a music mogul was not a far stretch for him to do, heâ€™s been doing it since the 90â€™s. 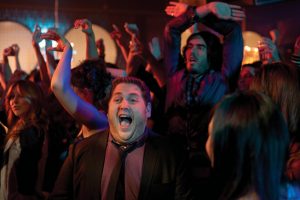 There were a lot of cameos in this film, but one of the stand-out ones was a scene involving Diddy and Pharrell Williams, disagreeing on each otherâ€™s choice of clothing. I personally believe they can expand on this movie and possibly make a part 2. As long as Diddy reprises his role, Iâ€™m sure itâ€™ll be just as funny as this one was. I give this movie 2 stars out of 4. It was a really funny and worth being seen. The movie ran 1 hour and 49mins. It was rated R for strong sexual content and drug use throughout, and pervasive language. It was written by Nicholas Stoller from source material from Jason Segel. The film was directed by Nicholas Stoller. It was produced by Apatow Productions. It was distributed by Universal Pictures.

You can take a rock star out of the lime light, but you canâ€™t take the limelight out of a rock star. Ezo
Next movie review: TBD