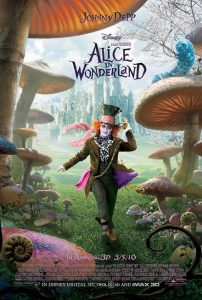 Tim Burtonâ€™s vision of â€œAlice in Wonderlandâ€ hit theaters this past weekend. In the story, Alice (Mia Wasikowska) returns to Wonderland now at the age of 19. Things are quite different from when she last visited as a child. She has no recollection of ever being there, but her friends the white rabbit, dormouse, tweedledee and tweedledum, caterpillar, the Cheshire cat, and The Mad Hatter (Johnny Depp) have been patiently awaiting her return. They tell her that she is destined to stop the reign of the Red Queen (Helena Bonham Carter), who has taken over Wonderland from The White Queen (Anne Hathaway). Now with the help of her friends, Alice must retrieve a sacred sword, which will help her defeat the Red Queenâ€™s most hideous and fearful beast.

Let me start off by saying that this movie dominated the theaters on its opening weekend, with a record setting $116.3 million domestic box office. It became the highest grossing 3D movie opening weekend in history. It was also the highest winter film opening, with $210.3 million worldwide. So needless to say, Tim Burton and Johnny Depp have done it again. I thought this movie was visually stunning, and well worth the admission price. Johnny Depp was excellent as The Mad Hatter, and I believe when heâ€™s done acting he will be Walt Disneyâ€™s highest grossing actor ever, if he isnâ€™t all ready. Helena Bonham Carter did a great job as the Red Queen. She was funny, and intimidating at the same time. She ruled â€œWonderlandâ€ with a giant head, and was quick to cut off anyone elses head, which stood in her way. Anne Hathaway also played her part as â€œThe White Queenâ€ superbly. She had this visual gag going on that was hilarious. Rounding out the live action characters in Wonderland was Crispin Glover who played Stayne-Knave of Hearts. He was the Red Queenâ€™s leader of her army, and close confidant. All of the computer generated characters were amazing to watch, and with the 3D it gave such great details in their design. I would also like to say that this film is not as dark as some of Tim Burtonâ€™s previous films. 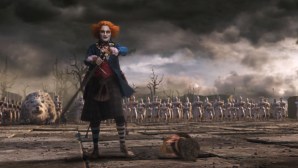 He made a new story of these characters, but stayed genuine to their origins. In the whole movie, there are only two scenes that might be considered a bit violent for small children. Both of those scenes happen during battles with swords. (One with dormouse and one with Alice) I give this movie 3 Hats out of 4. It was a fantastic journey back to Wonderland, which adults along with kids could appreciate. The movie ran 1hr and 49mins. It was rated PG for fantasy action/violence involving scary images and situations, and for a smoking caterpillar. It was written by Linda Woolverton, from source material from the novel â€œAliceâ€™s Adventures in Wonderlandâ€ by Lewis Carroll. The film was directed by Tim Burton. It was produced by Zanuck Company, The Team Todd, and Roth Films.It was distributed by Walt Disney Pictures, Walt Disney Studios Distribution.

If you ever come across a talking caterpillar, ask for directions. Ezo
Next Weekâ€™s Review: TBD