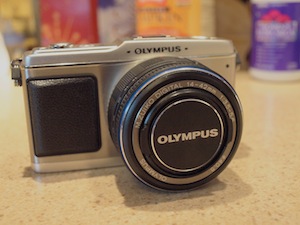 Man this is a total our bad on this one. We should of reviewed this long time ago. Truth be told one of our writers Jason Million, won the Olympus PEN E-P1 while he and I was at the gdgt.com launch event in New York. He did loaned it to me were I played around with it some but haven’t really used it to we headed to CES this year. There we used it up a storm, taking pictures and video. So here is our review from our CES use!

First off the PEN gets kudos on it stylish look, it has that great retro feel of cameras from back in the day. Adding in the digital aspects into this retro body is very cool. The PEN is heavy though! Maybe because of the lens and battery, but this isn’t no slim put in your pocket point and shoot. With the PEN, you had better have a neck strap for this thing. While after some time you will get use to the weight on it, after long periods if you don’t have a scrap, you are going to want to put it in a bag of some sort. 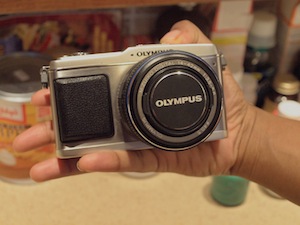 Ok enough with the lesson. How did this thing shoot pictures? Very well I’ll say. It was a little awkward shooting with it at first. With the weight of the camera, and having to manually adjust the zoom, it will take a little time getting use to. If you use to have a small point and shoot camera where your use to pressing the button to zoom in and out, this is especially true. The PEN E-P1 has a 12.3MP sensor so you will be getting some great crispy clear shots (provide you are one of those always taking a blurry picture people lol) and it also has a long of the feature of their recently released E-620 DSLR camera. Some of these cool features of the Art Filters for the camera. Like the E-620, the you have the cool Art Filters like Pop Art, Grainy Film, Pin Hole, and others. Then there is the dust protections that happens every time you turn on the camera, keeping the sensor clean for pictures.

The nice aspect, is the one I was really impressed with, the video recording. The Olympus PEN E-P1 is able to shoot video in 720p HD, and this was a dream. All of the videos we did from CES was in 720p thanks to the PEN. All of the videos looked crisp, clear, and and sharp! Now while we didn’t do any videos with them, you are also able to shoot video with the Art Filters. So if you want to record a nice grainy black and white video you could do so! The audio capture was very good as well, you can imagine with all the hustle and bustle of CES, being able to heard could of been a problem. Not with this camera. In fact, I could go as far as saying if you wanted a simple way to get 720p HD video with ease, skip the camcorder and get this camera. Think about it 720p HD video, easily recorded on SD cards, always expandable, easy transfer to PCs and Macs, and you get a 12.3MP camera in the deal. Sounds like a win/win to me.

How about price? This is where you will take a punch to the gut. The Olympus PEN E-P1 retails for $799.99, but I’m sure you can get it for a little cheaper than that if you look around. Is the camera worth that price? I don’t know about $799.99, but if they brought it down to say $599.99, I’d say hell yea go for it. But hey if you got it, sure I would spend on this bad boy. And tax refund time is rolling around so…..

For more information, check out www.olympusamerica.com. also check out the rest of the PEN shots in our Gallery