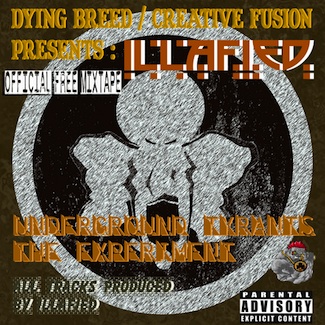 I think I get sent more non mainstream albums than I do mainstream albums. When this album was brought to my attention I was thoroughly impressed and haven’t taken out of my iPod rotation since. Dying Breed/Creative Fusion aka DBCF is a fusion of two production teams out of Pennsylvania that had been working and vibing with each other for awhile and decided it made more sense to join forces. They were both fond of their respective names so they just combined them. As a team they have an arsenal of talents such as rapping, poetry, producing and drawing just to name a few. I have heard a few solo recordings from a couple of the members over the past couple of years, but this was my first full on album experience with the team. The main standout song for me is:

28 Days feat Telep and Illafied, Change Your Love, Hold On, So Far (RMX), Da Theory andIt’s Like A Jungle

As a whole this album is a solid offering. I was forewarned the production was done on old equipment and they have since invested some serious resources into updating their sound system, but I couldn’t tell while listening. I felt the production as well as the lyrical skills could rival anything getting airplay today. Each track was layered with a certain musicality I haven’t heard commercially in a long time and tells a story on its own the lyrics layed over the track was just an added bonus. These were not cookie cutter hip hop tracks at all which made it even more refreshing to listen to. I can definitely see Illafied scoring movies. I am looking forward to hearing newer music from this team and hearing some of the production skills of the members they may be sitting on a gold mine. This album is definitely worth checking out you can download a free copy of the album here.