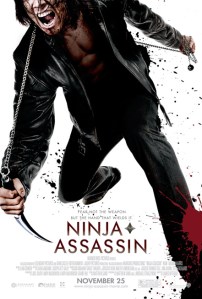 If youâ€™ve been waiting for the next action packed kung fu picture to come around, your wait is over. The new movie Ninja Assassin is just what youâ€™ve yearned for. The film tells the story of a Raizo (Rain), an orphan boy taken from the streets, and raised to be a ruthless, coldblooded assassin. He is taught the ways of the Ninja by the Ozunu Clan, a secret society of hired killers whose existence is considered a myth by the outside world. When his childhood friend tries to escape, and is caught and brought back to the school. He must stand by as she is punished by death, by the order of his teacher, Ozunu (Sho Kosugi). He soon runs away from the clan himself, and vows to stop them and their killing ways.

When a Europol agent named Mika Coretti (Naomie Harris) starts to make a connection between money trails that seems to show up around the time of political assassinations, she too becomes a target of the fabled clan of killers. Raizo saves her life, but he knows that the ninjaâ€™s will continue to come until both of them are dead. Now he must take his revenge to put an end to the bloodshed, thereby stopping the ninjaâ€™s and their deadly leader Takeshi (Rick Yune). With the help of Mika, and her boss Ryan Maslow (Ben Miles) they must convince the authorities that this myth is a reality and put a stop to the clans reign of terror. 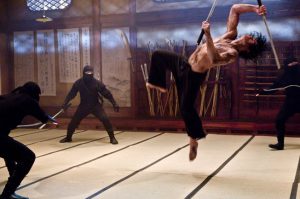 This movie was awesome. The fights were amazing to watch and it was filled with bloodshed and dismemberment. Itâ€™s been a long time since Iâ€™ve seen a kung fu action movie of this caliber. None of that flying through the air acrobatics, just straight weapons of mayhem being wielded by the deadest of assassins, ninjas. From the start of the movie you get a glimpse of what will be a blood splattered good time at the theater. Itâ€™s an opening that will have to longing for more, and more you will have. After the story is set up, the action turns on full steam and youâ€™re in your seat just mesmerized at the scenes you are witnessing. The shear brutality of the fight scenes will have any kung fu fan happy that they paid their admission price to see this movie. Itâ€™s sure to be one of those movies where you say, â€œjust how do they do all of that without actually getting hurtâ€ The action is moving so quick, you canâ€™t turn away for a second or your likely to miss something. There are body parts flying all through this movie, and it just gets better as the movie moves on to the final fight scenes between some of the main characters in the film. I give this movie 2 Â¾ ninja stars out of 4. It was a simple story that let the action speak for it, and I heard it load and clear. The movie is rated R for strong bloody stylized violence throughout, and language. It runs 1 hour and 39mins. It was written by Matthew Sand & J. Michael Straczynski (II). It was directed by James McTeigue. It was produced by Dark Castle Entertainment, Legendary Pictures, Inc., Silver Pictures, Anarchos Productions, Inc. It was distributed by Warner Bros. Pictures Distribution.

The next time your lights blow out, duck for cover. There might be ninjaâ€™s in the room. Ezo
Next review: TBD