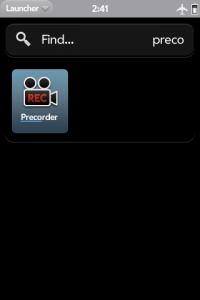 One of the biggest complaints about the Pre was the fact that it lacked video recording. We as consumers have come to expect certain standard features on a smart phone and the ability to record videos (no matter how bad the quality) is no exception. Needless to say when the Pre launched without video recording many people were disappointed. On a positive note, Palm did announce that the Pre would be able to record video and that this feature could be activated via a firmware update. Itâ€™s been over 5 months since the Preâ€™s debut and Palm has yet to officially give Pre owners video recording.

However, the extremely talented folks at Webos-Internals launched Precorder, an unofficial app that allows you to record videos on your Pre. Right now the application is in alpha stage but it hasnâ€™t stopped me or tons of other Pre owners from trying it out. The program is not without bugs and missing features of course but for an alpha program itâ€™s wonderful. And now Pre owners can capture short videos just like their mobile counterparts without missing a beat.

Precorder features the ability to record video in MPEG-4, H.263 and H.264/AVC formats. It also allows you to use the LED flash as a light source for low light conditions. Precorder records sounds and video outputs at 480×320.

There are a few things to note. You donâ€™t get visual feedback as you are recording so all you see is the gray screen and a notification telling you that recording is in progress. Iâ€™ve also experienced videos not recording the first time that I launch the program. Another issue is that I canâ€™t seem to record videos for longer than 2 minutes and if I do then my video doesnâ€™t save at all.Â  Also, audio quality seems to be rather low. But donâ€™t get me wrong these are NOT complaints as itâ€™s a pleasure to be able to even record at this quality with a homebrew app.

Here are some sample videos:

For instructions on how to get this running on your Pre please visit WebOS-Internals and if you like their work please donâ€™t hesitate to donate.