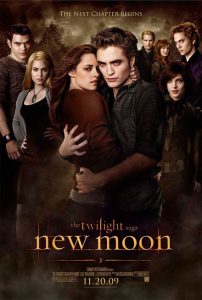 So this past weekend, the wait was finally over on the much anticipated second part of the Twilight saga, New Moon. Audiences crammed the theaters too see what new challenges faced the loving couple of Bella (Kristen Stewart), and her vampire boyfriend, Edward (Robert Pattinson). In this installment, Bella has just turned 18, and she is not all too pleased about it. To make matters worse, Edward tells her that he and his family are leaving the small town of Forks, Washington because people are starting to get suspicious of his dad’s age and it would be wise for him and her not to be together anymore. This drives Bella into a deep depression. After a while her father convinces her to get out of the house, because he is worried for her. Once she starts to be come back around her friends, her friend Jacob (Taylor Lautner) comes to see her. Since she has last seen him, he has buffed up quite a bit, but his feelings for her are still very strong.

They start to hang out together, and he believes that he is finally getting his chance to be with her. Then all of a sudden he comes to her and tells her that they cannot be friends anymore, and that he is going through some changes in his life that would make it very dangerous for her to be around him. Now she finds herself alone, once again. When she is almost attacked by one of the evil vampires from the first movie, she is rescued by a pack of overgrown werewolves who come to her aid. She soon learns that Jacob is one of these werewolves and his tribe, the Quileute, turn into the savage beast when vampires are near. This is also his reason why he had to distance himself from her. Alice (Ashley Greene), Edwardâ€™s sister, shows up thinking that Bella has killed herself. When she discovers otherwise, she tells her of the real reason of why Edward left her. The only problem is Edward also thinks that she has killed herself and has gone to see the elders of vampires, the Volturi, to try and get them to kill him,cause he can’t bare living in a world without her in it. So now Bella and Alice must race to Volterra, Italy to save him. Will they make it in time? Plus will the Volturi, be happy to see vampires so close to a human? 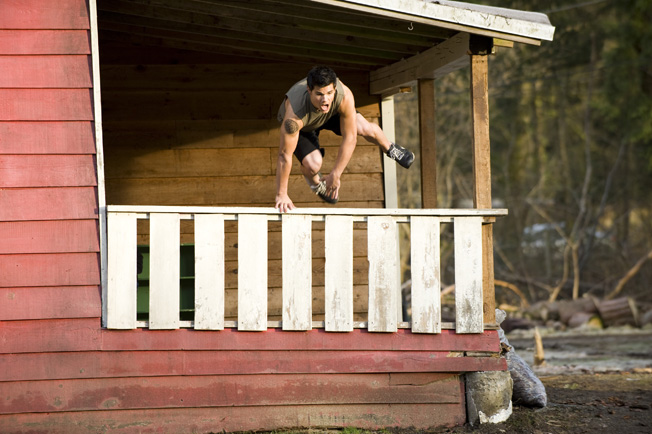 Since the review of the first movie, which I didnâ€™t write, I have seen â€œTwilightâ€ and I must admit that I enjoyed it. So I too was patiently waiting for this next chapter to come out, and just like the first one, I wasn’t disappointed. This new one has a bit more action, which is good, but it still basically stays to the premise of being a love story between a human and a vampire. The only thing, now it has developed into a love triangle with the character, Jacob finally telling Bella his true feelings for her. Now I havenâ€™t went out and brought all the novels of this story, but a source close to me says that the next chapter, Eclipse, will be the action movie that some fans are waiting for. I am one of those fans. Still I take nothing away from the first two films. They are well written, very entertaining, and not boring at anytime. These are the types of movies you can actually enjoy over and over. The characters are funny, the action is great, when it happens, and for the ladies, there seems to be a lot of shirts coming off the guys in this second one. Just like in the previous movie, the effects are superb, and visually stunning. The action scenes between the vampires and the wolves are very exciting, and I canâ€™t wait for a full out battle between the two clans. Also with the addition of the Volturi, it seems like the battles among vampires are going to be very intense in the next chapter. I give this movie 3 bites out of 4. Itâ€™s a must see for any vampire fan. Not since â€œThe Lost Boysâ€ have I seen so many teenagers running to the theaters to see a vampire movie. This movie has become the third biggest opening weekend with an estimated $140.7 million in ticket sales, in three days. The movie runs 2 hours and 10mins. Itâ€™s rated PG -13 for some violence and action. It was written by Melissa Rosenberg, from source material from Stephenie Meyer. It was directed by Chris Weitz. It was produced by Temple Hill Entertainment, Imprint Entertainment, Sunswept Entertainment. It was distributed by Summit Entertainment, LLC

Take a bite out of life, even if you think you donâ€™t have one. Ezo
Next Review: Ninja Assassin