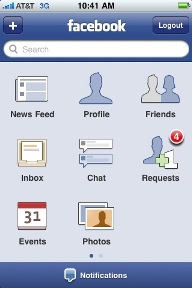 It wasn’t too long ago when Faceboook/RIM released the latest version of their app for Blackberry and I love it! You was able to do a lot more and it was slightly pretty then the previous version. Before that latest version, while I would use my Blackberry for Facebook here and there, I much enjoyed using the iPhone better. That changed when Blackberry released their latest. All was right with the world….

This was until last week. Facebook had submitted their iPhone app v3.0 to the App Store and it was finally release to the public. You must have heard about it, cause all the tech sites were buzzing about it. I downloaded it I believe last week Friday and I must say, Facebook/Apple has done it again. The new look is very clean, very nice. I like the fact that you can do a lot more than before, like a customizable launch type area. As seen in the picture above, in that area I can add friends to that space, so I can have quick access to them as well as rotate icons around just as if I was in the core iPhone/iPod Touch system. I even allowed more than one page of icons, as I was able to add more and then slide to each page just like the core iPhone system.

Profiles show up just about the same as they would if you were on the site itself, with access to the wall, info, and photos area. Another new feature (which isn’t in the Blackberry one) is in the friends area, you now have access to Pages as well. The whole feel of the app is great and I can see myself using it more now over the Blackberry one. Sorry BB, I still love ya though lol

Oh yea and speaking of Facebook, are you guys a fan of our page on there? If not, click the become a fan button right there to the right of the page :)