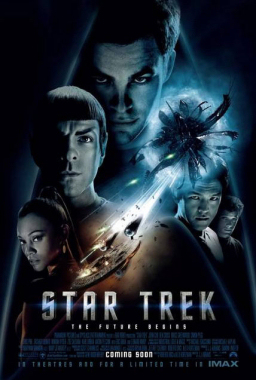 â€œTo boldly go, where no man (or franchise for that matter) has gone beforeâ€. That has been the theme of Star Trek for many generations and that continued this past weekend when they gave us a look back at the start of it all with a brand new Star Trek movie. In this one, its shows how the whole crew of the Star Ship Enterprise came to be. It showed how James Tiberius Kirk (Chris Pine) joined the Starfleet Academy, meeting for the first time Spock (Zachary Quinto) who would become his lifetime friend. It also shows how Kirk becomes the Captain of the U.S.S. Enterprise, with his trusty crew of Leonard â€œBonesâ€ McCoy (Karl Urban), Hikaru Sulu (John Cho) , Nyota Uhura (Zoe Saldana), Pavel Checkov (Anton Yelchin) ,and Montgomery â€œScottyâ€ Scott (Simon Pegg).

Now I have never been a Star Trek fan and have even laughed at people who were devote followers aka â€œTrekkiesâ€. Well let me be the first to say, that all of that changed with this new cast and fresh remake. This movie blew me away. It was interesting and exciting from beginning to end, and had me loving the characters that have been around since before I was born. The action was nonstop, and the banter between Kirk and Bones was hilarious. Zachary Quinto plays an excellent Spock and showed a side of the character I never knew existed. Another stand out character was Scotty who joins the crew later on in the movie. There are also a lot of â€œwinksâ€ at the old series throughout the movie including Leonard Nimoy reprising his role as Spock. Before I saw this movie I had read that all of the actors had signed on for two more sequels.

If this first one is any indication, it looks like this franchise will live on and prosper once again. I give this movie 4 phaser blasts out of 4. It was a very enjoyable ride and I am now a certified â€œTrekkieâ€. The movie made $114,204,289 in its first weekend worldwide which would have probably made more if not in competition with Wolverine. The movie ran 2hours and 7mins. It was rated PG- 13 for sci-fi action and violence and brief sexual content. It was written by Alex Kurtzman and Roberto Orci from source material from Gene Roddenberry. It was directed by J.J. Abrams. It was produced by Bad Robot, Kurtzman/Orci, Spyglass Entertainment Holdings, LLC. It was distributed by Paramount Pictures.

In Life You will sometimes go where no one has gone before. Make sure you have your phasers on stun. EZO
Next Weeks review:TBD