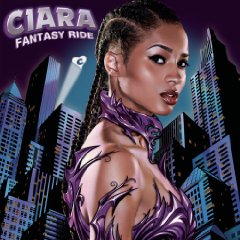 I will be the first to admit I am not a huge Ciara fan so I listened to the album with no expectations at all. I think that was probably the best approach because I must say the album is pretty decent. If she was going for an more international pop approach then she definitely hit her mark.

This is definitely a great dance/workout CD. There are a few of pretty good songs on this album, Tell Me What Your Name Is, Like a Surgeon and Work featuring Missy are some of my favorites on the album. A few other notables are Ciara to the Stage, which is the opening track and of course the single Love, Sex and Magic feat Justin Timberlake is probably one of the better songs on the album.

Overall this album fits the Super Hero soundtrack that I assume she was going for. I’ve never felt Ciara is vocally strong but she knows her lane and rides comfortably in it. I have to give it to her it’s not the RnB cookie cutter album others have been putting out and I think it will pay off for her as far as album sales and broadening her audience. However, High Price feat Ludacris sounds like a Hip Hopera song and it’s just…. wrong. I was disappointed that her song Go Girl feat T-Pain wasn’t on that album I wasn’t a fan of the video BUT that song is a definite banger. Do I recommend buying the album ? If you’re a hardcore RnB lover with little patience for this new age of music I think downloading a few singles may be the best way to go with this one. However, if you’re an open minded music lover with versatile and ecclectic tastes I would suggest checking this album out.