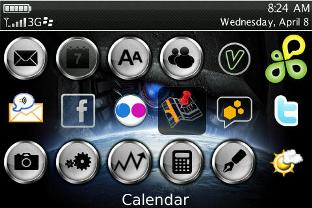 Ok if you don’t know what Twitter is, this article may be lost on you, and if you don’t know you can catch up here. Now for those who know what Twitter is, SocialScope is basically a Twitter client for the Blackberry. There are others like Twitterberry (whose time has come lol today), TinyTwitter, and others who add in twitter features like Viigo, but we regard SocialScope as the best of the category! Today we dive into version 9.5.5 some of you may remember Engadget Mobile give their review of v9.5.2 which has a whole new look. We just received today the newest version 9.5.5 and while the overall look is the same, we give our G Style spin on it. 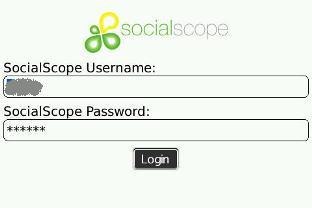 The very first thing I like about this new version is the removal of the double login screen. Before when I would launch Socialscope there would be a login or register screen and then after that another login screen. Now when you launch the app, you are taken to one screen (the image to the left) and that is it. You log in and your good to go. Thank you for that!

In a comment from the CEO of Ubiquitous Systems, they were focusing on bringing SocialScope up to the level of a powerful desktop Twitter app like Tweetdeck and I think they have done a GREAT job in doing so! Some of the new features they brought to this version includes:

-Multiple Twitter Accounts
-Twitter Profiles (you can now see a person profile with their information right in the app)
-Native Replay Messages (I love this feature!)
-Groups
-Save tabs after logout (So now if you have a tab for someone, after you log in it will remain)
-Native Twitter Search (I love this feature!)
-Save Search as tabs
-New Direct Message Interface
-New Icon (Though I think the icon on the main screen is wayyy too big lol)
-Cleaner Interface
-Comment on Facebook Updates
-Friends and Followers list
-Save updates as drafts (I love this feature)
-Read/Unread tracking (this is great, so now you can see which tweets you haven’t read if you have a lot of them) 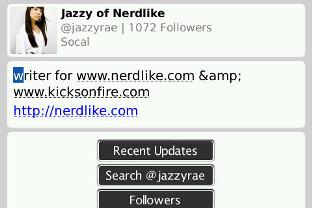 As you can see the improvements are quite substantial! But how does it look visually, what is it’s style level. First we like the new logo/icon on the main screen. It is way too big in my opinion but it they made it a little smaller, it would be perfect. Once I get into the app, it looks much better than the last version. Twitterberry needs to take note here. If you are going to change your UI, it should looker better than the previous, not worse! The new UI for SocialScope looks great! Some of the new features I wanted to high included one the profiles. As you can see in the picture to the left, you can now view a person’s profile right in the app which is great, from there you can see who they are folliowing and who is following them. Another feature I like is the reply system. If you click into tweet to read the whole message, you can just scroll down a little bit and start typing a reply to them. When your done, just click and choose update. Love this! 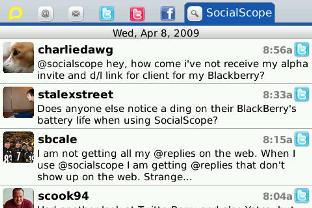 Another great feature is the Twitter search and the groups feature. With the Twitter search, I can have my search results right in the app and as a separate tab, this is very useful! And with groups I can put all my close buddies and important people in a new tab of their own away from the congestion of all the other tweets from having 2 accounts. Speaking of which, I now have both my personal Twitter account (twitter.com/jasonlanderson) and the G Style Magazine one (twitter.com/gstylemagazine) house under one house. This I must say is both great and not what I expected as well. If you have more than one account and they both are following a lot of people, that is a lot of tweets on the screen, not a bad mark on SocialScope but something I didn’t think about and will have to get use to. But that just makes the need for groups more relevant!

Today I officially say goodbye to Twitterberry on my Blackberry (If you are wonder for this testing I’m using SocialScope on my Blackberry Bold). I never understood why Twitterberry is always talked about as thee app for Twitter on the Blackberry, but I think the sole reason for this is because it is so hard to get a invite and install of SocialScope. And here lies the only downside I have to say about SocialScope. The application is GREAT, but if people can’t get it, I can only sing it’s praises so much. Hopefully they can work on that and the masses can enjoy this great application. At the time of this writing I didn’t get a response back asking about the invite situation, so hopefully this is on the top of their list. One I hear back from him on this, I’ll update you guys.

For now if you would like to request a invite to socialscope, goto www.socialscope.net and enter your information here. For some more screenshots of the new SocialScope have a look at our Gallery