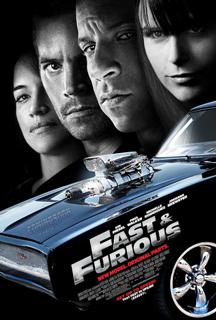 So this past weekend brought back the original 4 stars of the â€œFast and Furiousâ€ franchise. In this one Dominic Toretto (Vin Diesel) is reunited with Brian Oâ€™Conner (Paul Walker) when one of their mutual friends is murdered. Together they go after the people who are responsible for this crime, while still driving at outrageous speeds.

I have been a fan of the F&F franchise since the release of the first one 8 years ago. Vin Diesel decided to go after bigger paydays after the first one, but I feel the 2nd movie was just as good as the first without him. The third movie had a whole new cast, when Paul Walker decided not to be in that one. It wasnâ€™t a good movie, and we all thought the franchise had lost its formula. So for this new one, the 4th in the franchise they got the whole original cast to come back for another ride, Vin, Paul, Michelle Rodriguez, and Jordana Brewster. It was a decision that would bring the movie back its fan base. It was a good idea on paper, too bad they didnâ€™t have a good story to go with it. Now donâ€™t get me wrong, of course the driving scenes were thrilling and exciting and were great to watch, but the story just didnâ€™t have the feel of the first original. Vin Diesel kind of over acted in this one, and it didnâ€™t feel like it was from the real streets like the original. It wasnâ€™t gritty like its predecessor, and just felt kind of â€œHollywoodishâ€. Thatâ€™s what I call a movie that tries to take real life situations and exaggerates them beyond believability.

But have no fear they seem to be headed towards continuing the franchise. Maybe in the next one they can connect the viewers back with realism. People were waiting for this original cast to come back and the box office showed that, because the movie made close to $73 million in its opening weekend. Iâ€™m sure Vin will come back for a 3rd drive in this fast moving franchise. I give this movie 2 Â½ tanks of NOS out of 4. Itâ€™s still an adrenaline packed movie, and has some of the hottest cars on screen. The movie ran 1hour and 39minutes. It was rated PG-13 for intense sequences of violence and action, some sexual content, language, and drug references. It was written by Chris Morgan and Gary Scott Thompson. It was directed by Justin Lin. It was produced by One Race Films, Original Film. It was distributed by Universal Pictures.

If your living life in the fast lane, remember to pump your breaks from time to time to enjoy the scenery. Ezo

Next weekâ€™s movie: Observe and Report