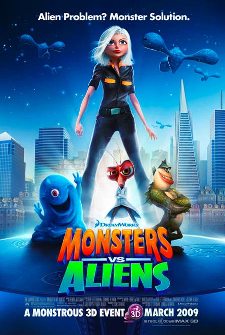 So I took my kids to see â€œMonsters vs. Aliensâ€. This animated movie is about a woman named Susan Murphy (Reese Witherspoon) who is hit by a giant meteor and grows 49 feet in height. The government captures her, renames her â€œGinormicaâ€ and puts her at a secret location where they have hidden all monsters since the 50â€™s. In the facility she meets â€œDr. Cockroach Ph.Dâ€ (Hugh Laurie), â€œThe Missing Linkâ€ (Will Arnett), â€œB.O.B.â€ (Seth Rogen), and a 350 foot grub named â€œInsectosaurusâ€. They are soon teamed up to save the planet from a giant alien robot that lands in California. But the robot wonâ€™t be theyâ€™re only problem, for his alien master â€œGalaxharâ€ is on his way to Earth and heâ€™s not looking to be friendly.

This movie had a lot of talented actors to give their voices to the characters, but that doesnâ€™t always mean it will be successful. Now Iâ€™m sure the whole Monsters vs Aliens plot of the movie will have a lot of kids wanting to see it, but remember parents have to sit through these movies also. Now because of that fact animated movies have started to add a lot of adult humor to theyâ€™re movies to keep the parents entertained as well as the kids. This movie had a little of that in the way that it had the nostalgic monsters from the old B movies of the 50â€™s, that most adults would know from black & white repeats. Other than that it wasnâ€™t much else to enjoy. Yeah Seth Rogen had some good lines as B.O.B., and â€œThe Presidentâ€ voiced by Stephen Colbert was hilarious, but that was about it.

Now my kids loved this movie, and basically thatâ€™s all the studios want, but there have been movies like â€œMadagascarâ€ and â€œShrekâ€ that would have even an adult rolling on the floor with laughter. This isnâ€™t one of those movies. I did enjoy it and I did have a couple of laughs, but it could have been funnier, much funnier. I give this movie 2 monsters out of 4. Iâ€™m sure theyâ€™re find a way to make a part 2 out of this story. After all animated movies are big business in Hollywood. The movie ran 1 hour and 34mins. It was rated PG for sci-fi action, some crude humor and mild language. It was directed by Rob Letterman and Conrad Vernon. It was written by Maya Forbes, Wallace Wolodarsky, Glenn Berger, Rob Letterman, Scott Rosenberg, Jonathan Aibel, and Conrad Vernon. It was distributed by Paramount Pictures. It was made by DreamWorks Animation studios.

Next Weeks review: Fast and Furious