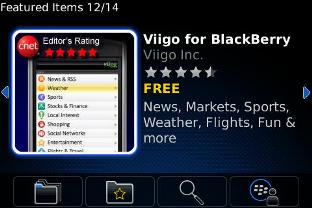 Apple has really made a impression on the mobile world! First with the iPhone, then the iPhone 3G. When that phone came out, people lost their minds and ever phone company wanted to hop on the touchscreen bandwagon, there has been some many iClones are the Apple fanboys like to call it around. Then there was the AppStore, the central point for all software, games, and more to be brought, downloaded, and reviewed. Now every mobile phone maker is scrabbling to get their own “store” into the mainstream. This brings us to today with the release of the Blackberry AppWorld, RIM’s version of the AppStore for Blackberry devices. 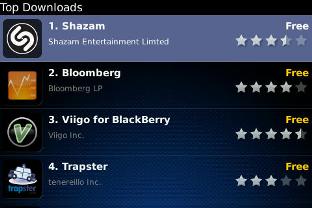 Visually the AppWorld looks very good, especially if you are a Blackberry Bold or Curve 8900 user. The sharper screens of those models really make the application pop! I really like the feature application area as it highlights 14 different application either paid or free and it looks nice with the icon, description, maker,s how many stars it has, and price. If you want to look more into it, you click on the icon and the next screen gives you access to reviews, the option to purchase of download and more details about the app. 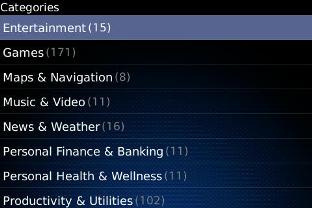 You can also view apps by “Top Downloads” which highlights the top 25 app and then by categories. All in all, this is a long over do situation for RIM. While I do like people able to download OTA from outside sources it is good to have the option to have a central home for applications as well. This is one advantage over the Apple AppStore that Blackberry has over the iPhone. You see I still have to option to use the AppWorld and get other software outside of it, for the iPhone, your pretty much stuck just use the AppStore as the only method to get software.

Should you check out the Blackberry AppWorld? Sure, who doesn’t like having to only go to one place when they want to look for something, plus you may discover something new like friend JustJenise mentioned onTwitter (twitter.com/JustJenise) “just downloaded it, I like it :) Finding out about apps I never even heard of”

Be sure to sounds off and let us know what you think of the AppWorld once you’ve downloaded it!