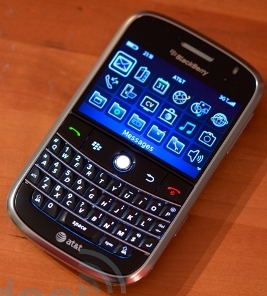 This has been a great week so far, how are things going with all you. First I must say this is the best shot I’ve seen of the Blackberry Bold thus far, and just further makes me fiend to get it. Do you see that keyboard Blue backlight, niceeee! (Photo courtesy of Engadget). Then we just finished giving away our first major giveaway with the Apple iPod Nano, congrats to the guy sitting next to you! And finally next week (though Best Buy made it look like they was selling it yesterday or today, yea store on 86th & Lexington, NYC we’re talking about you!) the Blackberry Bold will be dropping, November 4/5 (might be getting it shipped overnight) here we come! But ok, let’s dive in to see what else happened this weekend!

The Blackberry Curve 8900, AT&T Brand!
Nice we thought the Curve 8900 might be coming to T-Mobile first and AT&T way later, but this gives us hope. Check out the first impressions from [BGR]

Ginuwine is returning to the scene
Haven’t heard from Ginuwine in ages, but you know these artists all disappear for awhile and then try to make a come back. Now I like Ginuwine, but with the music industry still trying to find itself, if now the time? Check out more at [Billboard]

Free WiFi from AT&T again, and now with Blackberry Bold Support
Some of you may remember AT&T Wireless promising free WiFi for iPhone users long ago and then not making good on it. Well it seems, that have again made this offer and even including the upcoming Blackberry Bold in the deal as well. There have been some users reporting that this is working, so if you have a iPhone or a Bold come November 4th, try it out and see. Check out more at [The Earth Times]

NetFlix’s Watch Instantly is coming to Tivo
Ok so I’ve personally been hating on Netflix since they dropped HD-DVD videos back during the format war, but they seen to be putting themselves into everything lately. With Xbox360, Roku, Blu Ray players, and now TiVo. The TiVo Series 3 and HD getting it come December, check out more at [EngadgetHD]

Onkyo Add HD Audio & Video Enhancements to Their Home Theater Packages
Love their quality and now with a update to their packages as well. This is a great brand with many system to fit most budget ranges. Even on the low end, their system deliver. Check it out here.

The End of a Era, Goodbye VCRs
JVC had to be the only brand still selling them and with then shutting the doors on VCR, this is the end truly. It was great, you were the best, VCR may you rest in peace! Check out more here [Trading Markets]

Viigo Launches NBA Service
I don’t know how much I’ve mentioned on G Style, how hot Viigo is. I live & die by it! They have currently launched a NBA service, which is kind of like their NFL coverage. Viigo is for Blackberry and Windows Mobile device, and if you haven’t got it on your device by now, mannnn what are you waiting for! Check out more at [Crackberry]

The T-Mobile G1 Can be Unlocked
The fellas over at [Android Central] would like to remind everyone that while a bunch of news popping up lately on being able to unlock a T-Mobile G1, they did it first about a week ago. Check that out on their site.

That’s it for this week everyone, enjoy Halloween and enjoy the weekend!