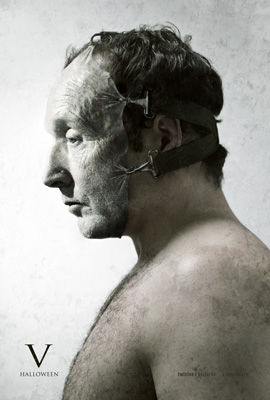 So this past weekend brought us another installment in the Saw series. Right on time as usual for the Halloween holiday, Jigsaw / John Kramer (Tobin Bell) was back to his games of survival. Now if youâ€™ve been keeping up with the series, Jigsaw has actually been dead since the last movie but that hasnâ€™t stopped him from putting people in his traps. He has had the help of other people who follow his ideas of making people pay for the bad deeds they have done in theyâ€™re lives. In this new feature, it follows Agent Hoffman ( Costas Mandylor) who has just been newly decorated for his capture of John Kramer, so to speak.

Now I donâ€™t want to give much away, but you may remember Hoffman from the 4th movie. He was assigned to the Jigsaw case along with Agent Strahm (Scott Patterson). In this one you would think how they can still promote Jigsaw as the trap master if he is dead. Well never to leave a job undone Jigsaw once again has already planed way in advance on who he is going to teach a lesson too, or as he calls it rehabilitate this people. Yes although Jigsaw is quite dead in this movie his legacy lives on, with the help of others he has trained in his methods of rehabilitation.

So, what do I think of this one? Well the first two movies were classic. The third one was pretty good too, but then Jigsaw was still pulling all the strings. By the time they had the 4th movie, things were starting to get a little redundant. Then with this one they tell you in the promos â€œyou wonâ€™t believe how it endsâ€. Now with that knowledge I figured that this would be the last we would see of the Saw movies. NOT!!!!! They already have a reality series looking for women to be in the next one, Saw VI. Come on people this is going to be another Friday the 13th disaster, which they are currently about to remake the first Friday the 13th all over again. I know that the Horror genre is one of hits and misses, but you have to know when to stop when youâ€™re on top. They should have stopped at 3 in this series, or not have him die so soon and have others doing his work. This one took us all the way back through all of the previous Saw movies in a way that you thought it was going to wrap up at the end of this one. Sure I get it jigsaw puzzle, and this would be the finale piece. Well it isnâ€™t, and who knows how long they are going to run this. As long as they continue to bring these movies out during Halloween, theyâ€™re going to make money. People want to be scared come October. I didnâ€™t like this one as much as some of the previous, and they are starting to get a little less in your face gory, and that could be a problem for hardcore Saw fans. We want to see these people killed thatâ€™s why we go to these movies, to be scared. When you start to just hint at mutilation that has been done to a victim, it gets boring real quick. Now donâ€™t get me wrong, they did have a couple of really good gory scenes, but nothing like the first three movies. I give this one 1 Â½ pumpkins out of 4. The movie ran 1 hour and 32 mins. It is of course rated R for sequences of grisly bloody violence and torture, language and brief nudity. It was directed by David Hackl. It was written by Patrick Melton & Marcus Dunstan. It was produced by Twisted Pictures and was distributed by Lionsgate studios.