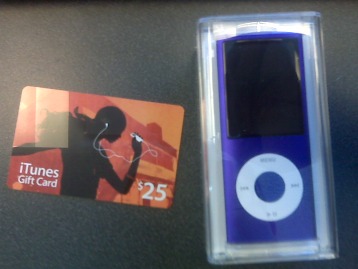 What a week for us here at G Style Magazine. Our first “full” week of October and the visits keep pouring in. We are truly celebrating our 3rd Anniversary. So far we have launched our mobile site and released our “Generation One” Blackberry theme both on October 1st. Now this week, we’re giving away a FREAKING iPOd man. We’re giving away one of those new Nanos with the Shake to Shuffle and Genius Playlist feature. This is our thank you to you for supporting us and coming back to see what is new. So this week, let’s recap!

Blackberry Curve 8900 Shows Up On T-Mobile Germany Website
We haven’t even seen the Blackberry Bold yet here in the US and Germany is already talking Blackberry Curve 8900 aka Javelin. Seems they have put up information on this Curve. That sucks, I swear if this Bold doesn’t get released soon! Check out more at [BGR]

The Dream New Album Coming December 16th
The Dream’s first album wasn’t too bad, I have to give it to him. I liked it, especially songs like “Fast Car” and “Nikki”. His new one doesn’t have a single yet but should soon. Check out more at [Billboard]

SlingCatcher Now Selling
Sling is one of those companies I’ve been following for awhile, but couldn’t partake yet. I’m still waiting for the Sling Blackberry client, so I can place shift some TV shows on the go. Now SlingCatcher on the other hand shifts content to your TV. It is now finally selling for $299.99 Check out more at [EngadgetHD]

Maxwell Back with some New Song
At a show at Radio City Music Hall debutted new songs “Pretty Wings”, “Bad Habits”, and “Comb”. These songs will be on his upcoming album “Black Summers Night” Check out more at [BillBoard]

Could Microsoft Buy RIM and Turn the BB into the MicroBerry?
I hope to god not. I like my Blackberry just as is. But a MicroBerry, nahh I’ll pass, but some are claiming this could happen. Check out more at [Reuters]

The HTC Touch HD, Not Coming to the US
This one just sucks, but according to HTC’s Twitter page, this phone is just not coming to the US. Honestly, you got me on this one. The one phone that could maybe be truly a “iPhone killer” and they’re not bringing it here. Check out more at [EngadgetMobile]

The View Audience Members Get Free Blackberry Pearl Flip Phone
Talk about Son of a B****!, the one show I would never be caught dead on, up and gives the audience a phone that isn’t even out yet. Wow is all I can say, check it out on [Crackberry]

G Style Magazine Gets a Mention on BerryReview.com
Looks like they have shown us some love on the release of our Blackberry theme. A quote taken from them “his theme features the G Style â€˜GSâ€™ logo with cutting edge fonts and stylish icons giving it that extra sharp and trendy look just like G Style Magazineâ€™s own online site. Great theme all around!” Check out more at [BerryReview]

That wraps up this week, enjoy the weekend everyone and don’t forget to enter in the Apple iPod Nano giveway!