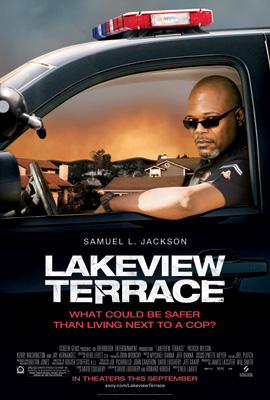 This weekend brought us â€œLakeview Terraceâ€ starring Samuel L. Jackson. In the story Samuel plays Abel Turner a cop living is the posh surroundings of Lakeview Terrace. He is not so happy to see a young interracial couple move into the house next to his. The couple Chris & Lisa Mattson (Patrick Wilson and Kerry Washington) have just purchased theyâ€™re first house and have plans of a long future there. Too bad they have a neighbor like Abel living next to them. From the time they move in, Abel makes it somewhat clear that he disapproves of their relationship when he talks to Chris. Chris ignores it as he has many times before when challenged about his marriage to Lisa. Lisaâ€™s own father (Ron Glass) barely even includes him in conversations between them. It doesnâ€™t take long for Lisa to also see that their new neighbor isnâ€™t the nicest of people, when she finds herself in the middle of an argument with Abel and his 15 year old daughter. When things start to get out of hand, Chris tries to fight fire with fire, but heâ€™s up against a cop and thatâ€™s not an easy task. To make things worst, thereâ€™s an out of control forest fire headed straight towards each of their properties. 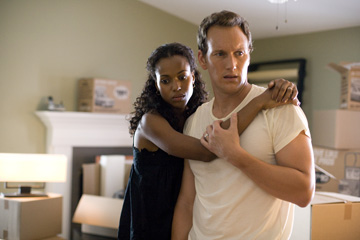 I actually enjoyed this movie, and its look at modern race bigotry and the problems it still brings. This movie could have taken place in any neighborhood, but being that it was in a lovely suburban area it made it even more intense. Who wouldnâ€™t want to live next to a cop, especially when buying a house? I guess itâ€™s good to find out who your neighbors will be before investing in a community. Samuel L. Jackson played this character very well. He was a strict, vindictive, evil, a-hole of a neighbor, and he also was a cop who had taken on that,â€Iâ€™m above most people" type of attitude, a lot of cops get. Patrick Wilson and Kerry Washington played their parts very well also, having to deal with the neighbor and also their own problems at home. I give this movie 2 Â½ houses out of 4. Itâ€™s rated PG-13 for intense thematic material, violence, sexuality, language and some drug reference. It runs 1 hr and 46mins. It was written by David Loughery & Howard Korder II. It was directed by Neil LaBute. The movie was produced by Overbrook Entertainment for Screen Gems Studios. It was distributed by Sony Pictures Releasing.

Cops can sometimes be abusive of their positions, hope that you don't move near one like that. Ezo
Next weeks movie: Eagle Eye