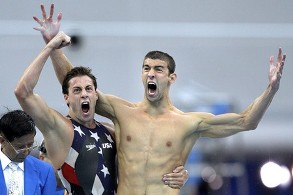 This has been a great week indeed. The Summer Olympics is in full swing. Michael Phelps is on fire (especially unique for a guy that spends a lot of time in the water lol), he is on to some 7 possible Olympic gold medals, and has already clinched the most gold medals in a Olympic career. And that was just Monday, let’s dive into this week’s recap!

AT&T Will Finally Have Some IPhone 3Gs in Stock
So you was looking forward to getting a new IPhone but still haven’t a hard time finding one. Well your in luck, starting August 19th, it should get easier finding one in one of the AT&T stores. It might now still be a piece of cake, but atleast somewhat easier. Check out more at [BGR]

New Olympic Event: Watching 24 Hours Straight of the Olympics
Now I know with the 12 hour difference NBC had to broadcast the Olympics from 7,8pm-12am each night, and for the most part myself have been keeping up. But 24 hours straight, that deserves a Gold medal in itself. Follow this heroic viewer lol as he blogs about his 24. [Mlive.com]

HDTV & the Internet Help Boost Olympics Viewership
I can not tell a lie. I myself have been keeping up with this year’s Olympics and can only credit HD as the reason. It just looks so much better in HD. Michael Phelps, didn’t even know who he was till now, and again I’ve become a fan since watching him in HD is exciting. And this is the thinking of NBC who is reporting some 29.1 million viewers have been watching, numbers that haven’t been reach since 1976. You can read more at [EngadgetHD]. My favorite line from there is “Be honest — would you have stayed up until 1:00AM watching men’s gymnastics had it not been in HD?” So true….lol

IPhone 3G: Still Problems
I swear, as much as I think the IPhone is a cool phone, I’m glad I haven’t jumped to get one. From the problems with MobileMe, to now this, I would be tight right now if I had one. It seems with the release of their 2.0.1 firmware people have been having issues with their GPS working on their phones. Check out more at [EngadgetMobile].

Blackberry Bold, pricey if you are on Rogers!
I hope to god they don’t try this on AT&T when it launches here. But the pricing for the Blackberry Bold is said to be $399.99 on a 3 year contract. A 3 year contact and the price is still $399.99, that is sad people. Read more at [Crackberry]

Master P is Launching his Own Channel Network, BET look out!
Seems Master P is getting into the cable game. He is set to launch Better Black Television or BBTV. And he has some good people behind him. Said to be on the Advisory board include Oscar winner Denzel Washington; Vault Load Films president Jim Finkl; NAACP executive director Vicangelo Bullock; NBA player Derek Anderson; cable industry veteran Prof. Sal Martino; hip-hop pioneer DJ Kool Herc; entrepreneur Olatokunbo Betiku; and real estate mogul Curtis Oakes. Check out more at [Billboard]

Kanye West and No I.D. currently working on Jay-Z new Album
So far Kanye and Jay have debuted one of those track in the “Jockin’ Jay-Z” song, so it will be interested to see if Kanye and No I.D. will produce the entire album. This so far is still unknown. This is to be Jay-Z’s last album with Def Jam and is slated to be called The Blueprint 3. Read more at [Billboard]