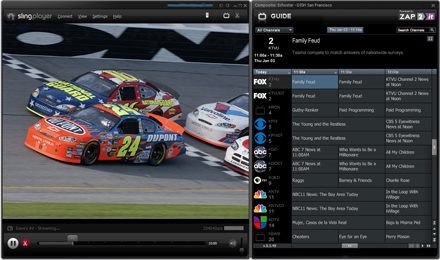 Here is this week’s recap, this week we have news from SlingMedia, Sprint, Colorware, Dish Network, Hulu, and more.

SlingMedia Releases Software Version 2.0 For Windows
This week SlingMedia released their 2.0 software for Windows. In this release, they have a built-in programming guide, a DVR like feature that lets you pause, rewind, or fast-forward up to 60 minutes of video from your PC. This version also comes with integrated Sling accounts, so if you can’t remember your FinderID, your ok. [BGR]

Sprint Loses 901,000 Subscribers
Ya know I’ve been saying this for awhile now, but Sprint is going under! They lost quite a few people last Quarter and now it seems, that have almost lost another million more. This plus their money trouble, won’t can only wonder how long they will last. Check out more here [Sprint Connection]

Get Some HDTV While at College
Going to College soon? If your lucky, your college of choice may try to entice you to come by throwing some HD your way. Seems colleges are trying to convince students to stay on campus instead of living in off-campus apartment. They are doing this by upgrading the amenities they offer now in their campuses. Check out [knoxnews.com] for more info.

Dish Network & Direct TV Merging?
Seems Dish Network isn’t doing too good, their solution to this problem; try to merge with DirectTV. Will this work as they hope? Only time will tell, now while their hasn’t been a proposal actually made yet, it is said execs are talking about it. Check out more here [Reuters]

Hulu Adding Some HD Shows
Remember Hulu, it seems they are adding some HD content to their lineup. They are adding 720p episodes of Heroes, 30 Rock, 24 and The Office. Now you may need a fast connection to really enjoy this, hey it’s a step in the right direction. [EngadgetHD]

Delta Airlines Adding WiFi to all their Flight Come 2009
Now this is definitely a step in the right direction. WiFi on a plane is just plain good business. I would love to be able to surf the web while traveling. While now Delta seems to be stating they will be adding WiFi to all their domestic flight come 2009. It won’t be free of course, but hey sometimes you got to pay to play! [BerryReview]

Jay-Z’s Last Album with Def Jam is Coming
Jay-Z’s 11th album and final one with Def Jam is on it’s way. So far titled The Blue Print 3. No date has been set for its release. Afterward, Jay-Z will begin recording for Live Nation as part of a deal he signed with the company this spring. Read more at [Billboard]

Usher Splits with Manager, Publicist
It seems Usher hasn’t found a stable team yet as he has split with his recently hired manager Benny Medina and Publicist. Benny was most notable in his work with the launch of the artist’s recent album, “Here I Stand.” In 10 weeks, it has sold 948,000 units in the United States. Check out more on this at [Billboard]

That wraps up this week’s recap, check more new recap next and every Friday from G Style Magazine!