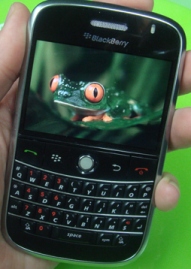 This seems to be a Blackberry Friday lol. The Boys over there at TheBoyGeniusReport are reporting that the Blackberry 9000 is confirmed to be announced on May 12th at WES 2008. There will even be booths where you can demo the device, man I wish I was there. One can only hope that if it is announced on May 12th, we can get some possible announcements on when it will be coming to stores.

I’m about 90% sold on the thing after looking at the review from Crackberry.com, but I’m still on the fence about that keyboard. I like the keyboard of my current Blackberry Curve, I wish they would of did that one, so I won’t be 100% sold until I can get one in my hands to see how that keyboard feels. May 12th, let’s see what happens!