In our last piece G Style introduce you to Tha Heights. Well we took some time to talk with the members of Tha Heights, Manny, Frito, Sosa, and Winston. So pull up a chair and see what these guys have to say…

GS: Thank you guys for taking the time to talk with us. So who is Tha Heights?

GS: How long have you guys been together?

TH: Going on 6 years now. Me (Frito), Manny, and Winston grew up together. Sosa came into the group about 2 years ago.

GS: How did you guys get started, was this something you always knew you would do?

TH: We was just messing around, chilling at the crib, singing over other people’s music until we met Pat then we got serious. We came across Pat through a member who is no longer with us. We have been together since. 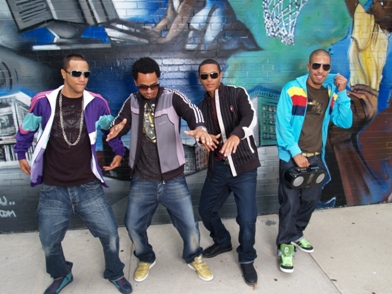 GS: So where do you guys plan to take it next, what’s next for you guys?

TH: Right now we are just working hard in and out of the studio. Going to dance classes, and trying to get a tour coming this summer.

GS: Where can your fans go to listen to your music?

TH: You can go to FameCast.com, we in a competition for this show in Texas, also Bazookajoe.com we have music on there. where also on Myspace and ThaHeights.com.

GS: Any closing comment that you want the world to know about you guys, let’s go around the table, Frito?

Frito: I just want the world to appreciate our music and our talent, and the hard work we put into this.

Winston: Just want the world to know that were going to take this game by storm, we’re not like any group that has been out there. And we’re really about something different and positive. Coming through as a unit , that we’re down for our fans and we really enjoy what we do.

Manny: I just want the world to know that we are the next Latin Popping B sensation taking the world by storm!

The group has a sound that is fresh and inviting, a look that isn’t hard on the eyes. With a hit jingle in the Bazooka Joe commercial under their belt, is this group set for super stardom? We like to think so here at G Style Magazine. Keep an eye out for these guys and when you get a chance go buy some bubblegum!

How Technology Changed the Entertainment Industry