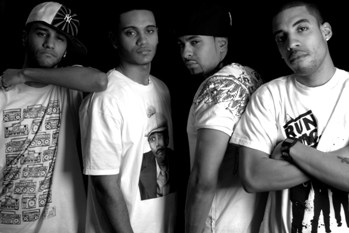 Donâ€™t be fooled by their boyish looks; these guys are so much more than another boy band–their repertoire consists of a wide range of songs to satisfy almost any taste, and diverse musical influences to match. Sosa was inspired by Donny Hathaway and Celia Cruz while Winston was by Boyz II Men and Larry Graham.

The group which also consists of Manny and Frito offers a little bit of everything-from the very necessary club bangers to reggaeton to even pop ballads. These guys have an all star team behind them including both Reggie Hamlet (Angie Stone, Jennifer Lopez) and Queens newcomer, Jonathan â€œBonkazâ€ Howard (50 Centâ€™s P.I.M.P 2). They have lent a hand with the production while singers and songwriters, Daniele Stokes of the 90â€™s Platinum selling quartet, SOLO, â€œLil Eddieâ€ Serrano and newcomer songwriter â€œPhenomâ€ have provided the edgy lyrics.

Tha Heights signed with Patricia Taylorâ€™s OFFbeat Entertainment Company in 2003 and have since served their saucy musical blend to audiences throughout the New York metropolitan area–most recently for a LifeBeat concert, at both Musikfest in Pa. and Kids Arts Week NY. The guys have also been featured at the famous 116th Street festival in Spanish Harlem; at Bronx Week 2005 and New Jerseyâ€™s Latin Expo. They also made several guest appearances on Telemundo’s 47 morning news, Noticias and Univisionâ€™s 41 morning news show.