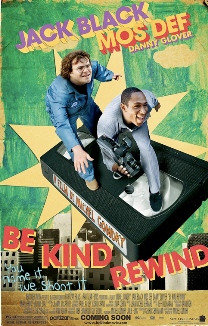 Why does Hollywood persist in making movies about people working in VHS video rental stores, i.e.”Clerks” some years ago. In this new movie, rental clerk Mike (Mos Def) finds himself in a dilemma, when his best friend Jerry (Jack Black) is electrocuted, and becomes magnetized, and accidentally erases all of the shops VHS tapes. Unfortunately for Mike this happens at the one time when he is put in charge of the shop, by his boss Mr. Fletcher (Danny Glover). The guys have just a couple of days before Mr. Fletcher returns from his trip, to re film all of the deleted tapes. The only problem is, that people are coming to rent movies. So they decide to come up with a plan so that they can film the movies that people want to rent, by request first. They film 20 minute shorts of the original movies, and it becomes such a success, that the whole neighborhood wants to join in. Unknown to them, Mr. Fletcher is out trying to find a way to keep his business running, without it being brought out by a developer trying to update the area. The guys film classic movies, from RoboCop to The Lion King to King Kong, a comedic wink at Jack Black who starred in the newest remake. 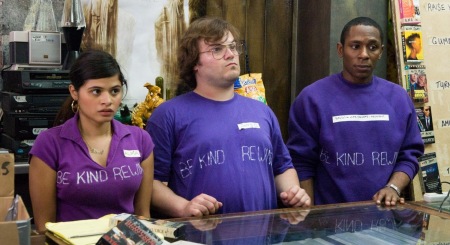 This movie felt like a VHS tape. It was a story, way pass it’s time, and actually died out just like VHS tapes in the first few minutes. The script had no really funny scenes and just seemed to drag on for far too long. There was a side story about ‘Fats Waller’ growing up in the actual building where the shop now stood, but it didn’t interest me either. There was a reason why VHS tapes got left behind by the innovation of DVDs, they brought better video quality of movies to the costumers who were investing in them. The writers of this movie, should have taken that knowledge, and thought better of making a movie that revolved around the sell of VHS tapes. There was only one scene, that made me laugh out loud, and that involved the guys trying to break into the competition DVD rental store. As you can see it even took DVD reference to give this movie it’s biggest laugh. I thought about how I should rate this movie in my usual way of using a reference from the movie as a rating meter. So I decided I should use the method of how many VHS tapes I owned compared to how many DVDs I owned. Now don’t get me wrong, I still own some VHS tapes, but the ratio is about 1 out of every 5 DVDs or so. So I took one of those VHS tapes and broke it in half, and thats the rating I’m giving this movie 1/2 VHS tape out of 4. Wait till you have nothing else to watch, if your interested in seeing this movie, and then see it for free on cable.

Life is a movie, be a star. Ezo